Ian’s Ballads is a brand new raid event in Rise Of Kingdoms. With your friends, you will fight against many barbarians and 3 main bosses. After each boss, you will receive a chest that contains blueprints for gear and materials. Ian’s Ballads, you can choose 5 difficulties.

The birth of civilization. The ballads of Ian the Bard shall bring the light of dawn into this world. Ian’s Ballads: Verse One

On a night of a blood moon,
the Karaku Kingdom had completed their ceremony for eternal
life. However, servants of the Evil One secretly replaced the
ceremonial offering.
And thus, the sun shall set upon the Kingdom of Gold. 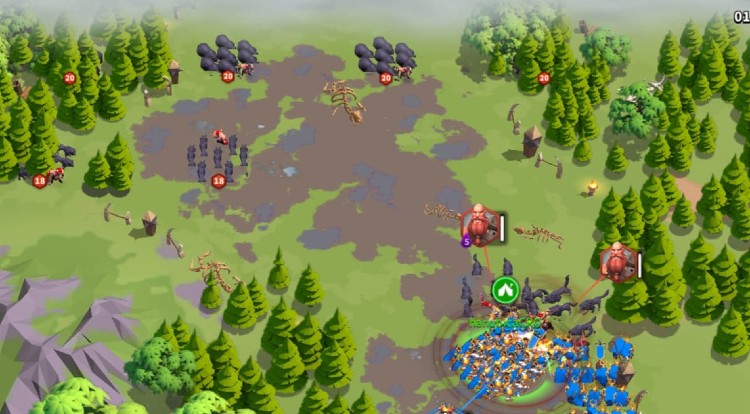 Gourmandize: Heals 10% of the units led by this commander every time they defeat an enemy army

Each barbarian and boss will stack bonus damage on your troops. It is important that you start escaping if you get 15-20 stacks. If you do not get attacked by barbarians for 2 seconds all stacks will be removed. So pay attention to stacks or you will die fast. 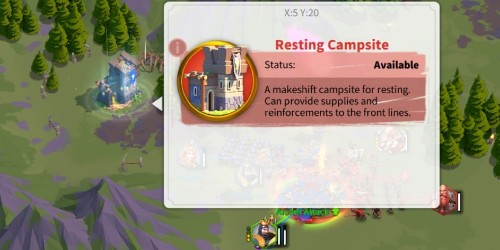 A makeshift campsite for resting. Can provide supplies and reinforcements to the front lines.

You must activate campsite. The most important thing about it is that you do not have to be scared of dying. When you die you will be able to respawn on the nearest campsite and you will have the option to choose new troops and commanders. 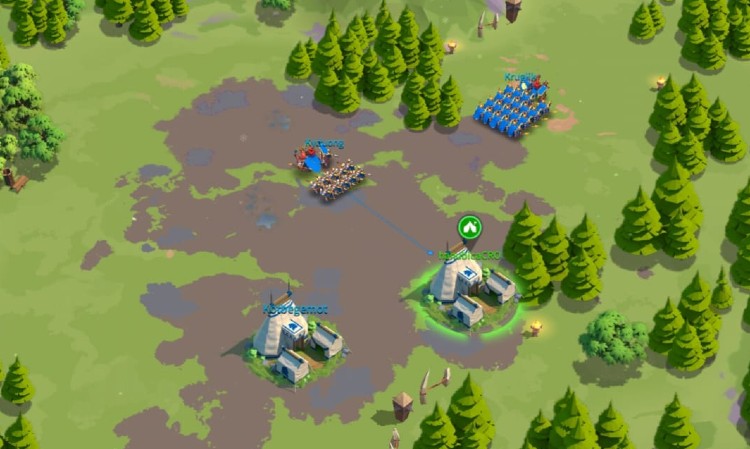 After each fight, you can use heal. It will transform your troops in a medical camp. To active heal, press healing icon in the right bottom corner of the screen 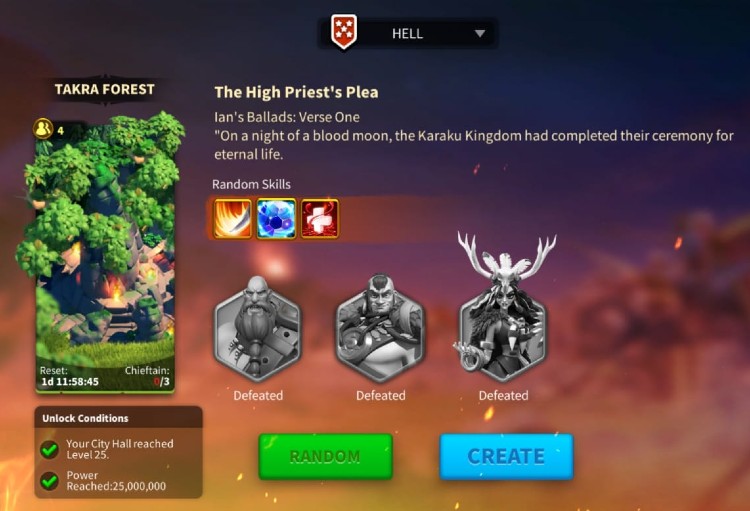 Hunting Instinct: Huntmasters are proficient hunters. Increase skill damage by 10% each time they use a skill, this effect can stack.

Desperate Will: When the Huntmasters troops units are reduced to 25%, he will unleash his fighting spirit, increasing all damage dealt by 100% until the end of a battle.

Impulse: The Huntmasters attacks have a 20% chance to heal 1% of troops units to self.

Tips- This is a very simple boss to do, position your troops in four different sides to avoid Slash skill. There is no something interesting for other skills, all you have to do is nuke him down.

Ursine Strenght: Mokka summons 2 troops of bears to aid him in battle. Mokka gains strength while the bears are on the battlefield.

Instinct: The Beastlord protects his herd. When troops summoned by the Beastlord exist, increases defense of units led by “Beastlord” Mokka by 100%.

Roar:The herd bellows and awakens the Beastlord’s primal instincts, for each troop summoned by the Beastlord that exists, increases “Beastlord” Mokka’s attack by 20%.

Beastlord Awaken:The Beastlord becomes fully engaged. After entering battle for more than 300 seconds, “Beastlord” Mokka increases all damage dealt by 200% until the end of battle.

Tips- Well this is a simple boss too. When he spawns troops just kill them immediately because for each troop he will gain 20% damage. Try to kill him in 300 seconds so you avoid his last skill that will boost his damage by 200%.For this boss, you will again use nuking commander.

Flame Totem: Whenever Flamebender uses a skill, a Flame Totem is also summoned. While a Flame Totem lasts, it heals 1% of its troop units every second.

Ring Of Flames: Flamebender sprays forth searing flames to deal damage per second (Damage Factor 100 to all enemies in a circular )area.

Fiery Sacrifice: Flamebender uses her fallen enemies as sacrifice. Whenever she defeats a troop, she heals troop units by 20% and increases all damage dealt by 200% until the end of battle.

Tips– First, do not die or you will activate Fiery Sacrifice that will heal 20% of troops and increase damage by 200%. When she spawns Flame Totem just destroy him, you need 2 or 3 normal attacks to destroy totem.You have to destroy totem because his heal is insane, especially when she is on full health. For this boss use nuking commanders also. 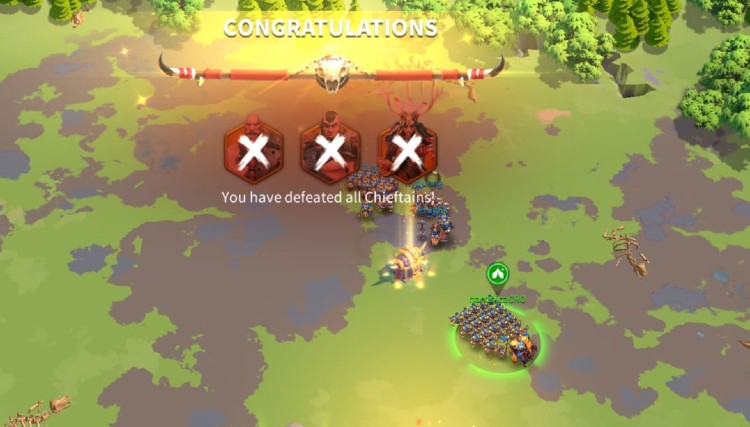 Ian’s Ballads is not hard event, just be careful with stacks and do not pull too many barbarians. Use nuking commanders like Minamoto, Cao Cao, G.Khan, etc. You do not have to be scare of dying because you can respawn and you can choose new commanders if you want.

Before you enter  Ian’s Ballads event use army expansion, attack boost item, take damage rune. you can go with an alliance title, skill but there is no need. It’s an easy event.

Keep in mind that you can take rewards only one time so go for the hardest difficulty. You can lower your difficulty if it’s too hard for you.