Baibars is the best epic cavalry commander for big fights. All because of his first skill that can do damage to 5 targets at the same time.

Baibars is not a commander that you will send to fight 1vs1. He will lose most of the 1vs1 scenarios. He is designed for big fights like in kvk, aoo and sunset canyon where he can hit 5 targets with no problem.

Baibars was the forth Sultan of Egypt and Syria during the Mamluk dynasty. In September 1260, he routed the invading Mongol army at the Battle of Ain Jalut – this was the first major defeat ever suffered by the Mongols. During the battle, Baibars implemented a strategy of hit-and-run tactics, which baited the Mongol forces into an devastating ambush. Baibars is renowned both for his victories against the Mongols and Crusaders, and for the administrative reforms he implemented within the sultanate. An ambitious military leader, Baibars organized an army and restructured the existing navy. He donated heavily to public works, including building roads, mosques, schools, and post offices, as well as irrigation projects to increase the country’s grain production. Baibars’ reign pushed the Crusader’s out of Mamluk territory once and for all, and began a new age of Mamluk supremacy in the Eastern Mediterranean.

This is only good talent tree build for Baibars that will provide skill damage. 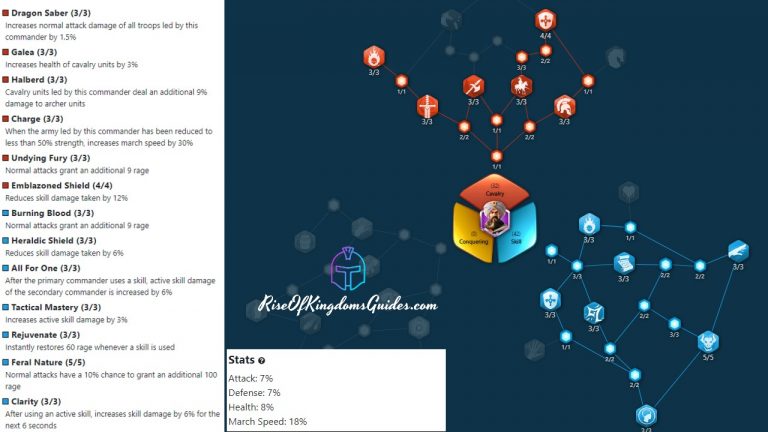 For me, this is the best pair for Baibars. Athelflead’s first skill will also hit 5 targets at the same time and she will bring a 30% reduction to enemy stats. Great combo for big fights.

Baibars and Sun Tzu is nice duo. Both have AOE damage and Sun Tzu will bring Rage generation so Baibars will be able to use AOE skill faster.
You can pair him with any other commander that you want but remember Baibars is a commander for big fights where he can hit 5 targets, not for 1vs1.

When attacking cities, normal attacks have a 100% chance to decrease garrison attack by x% and defense by x%.

Upon leaving battle (But not when routed), heals a portion of slightly wounded units (Healing Factor x) and increases march speed by x% for the next 10 seconds..

Blot Out The Sun

Deals massive damage (Damage Factor 1000) to enemies in a forward- facing fan-shaped area (maximum 5 targets) and reduces current target’s march speed by 50% for the next 2 seconds.