Boudica is a great commander for players who just started with Rise of Kingdoms. With Boudica, you can kill barbarians, forts, boost the experience . For PVP she is great on new servers but on old, she will not perform well next to strong legendary commander.

Destroyer – The best build for barbarians and barbarian forts. With this talent tree build, if you have decent technology you will melt LVL 5 forts.

PVP – This is only good PVP talent tree build for Boudica. With this build, you can also destroy and farm barbarians.

Boudica is a great commander for people who just started playing Rise Of Kingdoms.

She has a strong nuke and she will perform great on new servers. If you are on the old and developed server do not use Boudica for PVP.

On old servers, she can be used only to kill barbarians and forts. Just do not use Budica for PVP fighting. You will get focused by strong players with max nuking commanders like Khan, YSG, etc. They know that she is weak again legendary nuking commanders and that she can die very fast.

Boudica is a best Rise Of Kingdoms commander to kill forts and good thing is that she can work with any type of troops. She has insane damage against barbarians.

You can pair her with Minamoto, Lohar and Cao Cao.
For forts, you can build Budica with nuke talent and use any other commander with nuke as secondary.

If you do not have Minamoto you can get your Cao Cao to 5111 and you will be able to do an insane amount of damage to forts.

I must say this again do not use Boudica for PVP fight if you are on old servers you will get destroyed, only use here if you are on new servers when players do not have strong commanders.

Lament of the Insurgent

Active Skill
Deals massive damage to the target and reduces its rage. Decreases attack of target’s troops for the next 2 seconds

Passive Skill
ncreases damage dealt to barbarians and other neutral units by troops led by this commander and increases commander experience obtained from these targets by 20%.

Passive Skill
Boudica restores rage and heals some of the slightly wounded units in her army whenever she uses a skill.

Queen of the Iceni

Passive Skill
Troops normal attacks have a chance to increase the damage dealt to enemy. 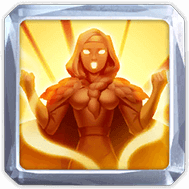 Roar of the Insurgent

Enhance: Lament of the Insurgent
Deals massive damage (Damage Factor 1000) to the target and reduces its rage by 100. Decreases attack of target’s troops by 25% for the next 2 seconds.

Boudica was a queen of the British Celtic Iceni tribe who led an uprising against the occupying forces of the Roman Empire in AD 60 or 61. However, the Roman governor Gaius Suetonius Paulinus’ eventual victory over Boudica confirmed Roman control of the province. Boudica then either killed herself to avoid capture or died of illness. Interest in these events revived in the English Renaissance and led to Boudica´s fame in the Victorian era. Boudica has remained an important cultural symbol in the United Kingdom. The absence of the native British literature during the early part of the first millennium means that knowledge of Boudica´s rebellion comes solely form the writings of the Romans. If you want to learn more about Boudica history and how she became a cultural symbol for the United kingdom visit Wikipedia and History channel.