Hannibal Barca is a great commander to have for new kingdoms but. If your kingdom is older then 300 days+ do not buy him, it is not worth it. He will get destroyed on old servers by strong commanders like G.Khan and later you will have a better commander for rallying city. Check out our Rise Of kingdoms Tier List for Hannibal Barca alternatives.

Why is he great for new servers?

First thing is that he will provide a great amount of defense and damage reduction, and most important is that you must use 3 different types of troops to activate bonus damage from second skill.

We all know when you are a new player you will have a small number of troops so you will have to use mixed troops. That is why Barca is great.

He is insane for attacking cities too. But only for new serves because on new servers most of commanders do not have nuking damage. Later you will have commander like G.Khan who will nuke down your Barca.

On new servers, most players will use tanky commander with a lot of defense so that is where Barca will be good with his first skill.

One more thing is that on older servers you will not rally city that often.

Most PVP fights will be on your territory so you will lose damage bonus from his fourth skill.

So remember that Hannibal Barca is insanely great commander to have on new kingdoms that are not older then 300 days but for 300+ days kingdoms he is will still be ok for rallying city but for PVP he will be terrible.

Is it worth it to buy Hannibal Barca?

if you have money then go for him but if you are a small spender just avoid him. It is not worth it. Usually, big pay to win players will lead a rally.

Use Aethelflaed primary commander because she has a higher defense reduction on Aethelflaed talent tree build. This pairing is best for mixed troops in ROK and in my opinion, this is a commander that you can have with Barca for rally and PVP.

Active Skill
Deals direct damage to a single target then decreases target’s damage and defense for the next 5 seconds.

Passive Skill
When attacking other Goverrnors’ garrisons, Hannibal has a 10% chance to heal some of his slightly wounded units..

Passive Skill
Increases troop capacity. When battling outside of alliance territory, increases the damage of all Hannibal’s troops for 3 seconds after using a skill. 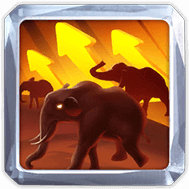 Hannibal Barca was a Carthaginian general, considered one of the greatest military commanders in history. His father Hamilcar Barca was the leading Carthaginian commander during the First Punic War. His younger brothers were Mago and Hasdrubal, and he was brother-in-law to Hasdrubal the Fair. Hannibal lived during a period of great tension in the western Mediterranean Basin when the Roman Republic established its supremacy over great powers such as ancient Carthage, the Etruscans, Samnites and the Greek king of Syracuse. One of his most famous achievements was the outbreak of the Second Punic War when he marched an army which included war elephants from Iberia over the Pyrenees and the Alps into Italy. In his first few years in Italy, he won three dramatic victories – the Trebia, Lake Trasimene, and Cannae, in which he distinguished himself for his ability to determine his and his opponents’ respective strengths and weaknesses, and to plan the battle accordingly – and won over many allies of Rome. Hannibal occupied much of Italy for 15 years but was unable to march on Rome. An enemy counter-invasion of Nort Africa forced him to return to Carthage, where he was decisively defeated by Scipio Africanus at the Battle of Zama.