Saladin is a legendary cavalry commander that you must have if you are a cavalry player. One of the greatest legendary commanders in the Rise of Kingdoms game includes Saladin talent tree. He is the powerful anti-debuff and the city conqueror.

One of his abilities is in minimizing the healing effect of the march as well as counterattack damage to decrease tanks on the battleground. Saladin is a fabulous commander to have if you will know how to use it properly. Because of the first skill, Saladin is a great counter to Richard. With 5551 skills and right talent tree build Saladin is an insanely strong commander. 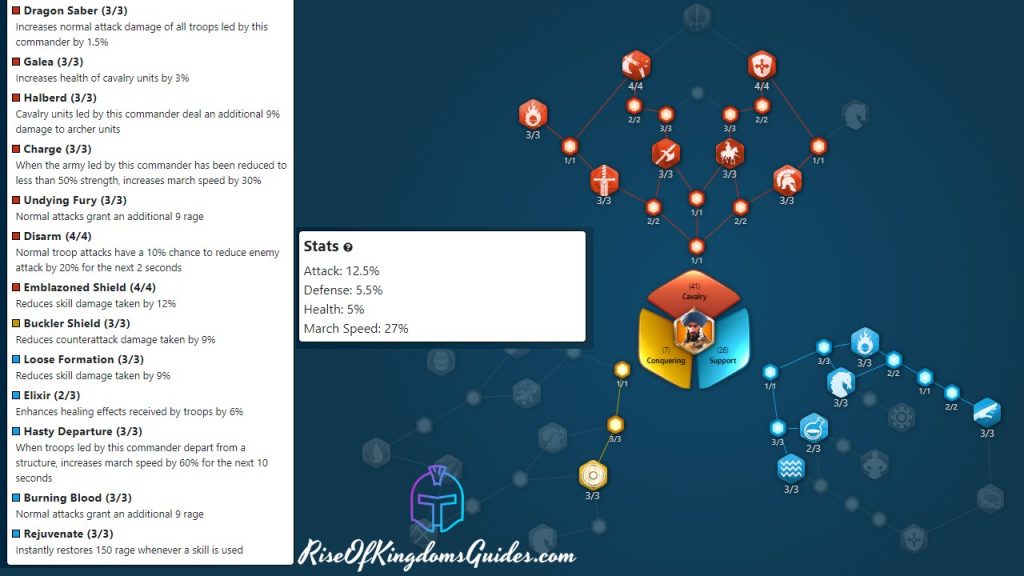 Saladin is a best cavalry commander that you must have if you are a cavalry player. He will bring so much value to field fights and he is great for a rally. If you are free to play I would recommend you upgrade Saladin on 5551.You do not need him on max skill.

Max skill will bring you some extra nuking damage but not much value especially because his fourth skill is only for rallying city. If you are planning to rally city with Saladin then you must max his skills.But I would leave that to pay to win players.

Saladin is a great commander because he will not lose value with time. When Rise Of Kingdoms adds new commanders Saladin will still be a beast of commander. You will use him all the time.

We all know that most of players will have Richard on max skill and that Richard is hard to kill. With the first skill of Saladin, you will destroy Richard. Saladin’s first skill has 40% healing reduction, insane nuking damage, and slow so Richard will not be able to run. Saladin is a simple design to destroy Richard.

Saladin is a great nuker but also he is a great tank because of his second and third skills that will give him so much received damage reduction and defense stats. Also, his talent tree is great so you will be able to get there more skill reduction if you are getting focused a lot by nuking commander.

Overall Saladin is a commander that you simply must have and he is cheap to get. Get 5551 Saladin and you will not regret it. If you planning to use Saladin as a rally commander in AOO and for burning cities then you must upgrade him to 5555 to get most of him.

Saladin is tier S Rise Of Kingdoms commander for open field and for rallying objectives.

Overall, Saladin is one of the greatest commanders to have if you need to attack the enemy. Having this type of talent classification is desirable to use in a rally since it will weaken, which only works for a direct attack in strongholds and cities.

For an open ground build, Saladin is great for his Hold fast direct damage skills that are safe to use when defeating the enemies. As it helps reduce the healing effect that any of the opponents throws or hits with this skill.

The Ghulam ability makes him a difficult target to defeat as a commander. The main real enemies of Saladin would be the group of Alexander, Richard, and Guan Yu. But, if you will use the 3rd skill of Saladin, which is namely the Fate and Bond, it will help reduce the damage in the skill from 30% and have the chance to recover.

With Saladin, you can maximize your army’s overall combat strength with the talent builds, commander pairings, and skill paths. Whether you are only starting to play Rise of Kingdom or you want to increase your commander poster, Saladin is best to have.

Saladin excels as a mighty cavalry commander on the offensive side. This is if you want to become a strong player and conquer the Kingdom by yourself. And this legendary Commander, Saladin, is best for you to pick and focus on, which the governors can also obtain. This can be possible with the Card King event and the wheel of fortune event.

Saladin is a playable character in the Rise of the Kingdom. Saladin is a unique hero: he is a unique blend of physical and magical damage dealers. His damage output is less than that of other characters, but it’s unique in that his unique abilities allow him to deal unique damage.

In Rise of Kingdom, hundreds of players will unite as one to take control of a Kingdom as its new ruler. As a Kingdom’s ruler, you will have the opportunity to create a Kingdom of your dreams, but you must outmaneuver the rest of the Kingdom’s players to be the one to rule it. Rise of Kingdom is a Kingdom-based strategy battle royale game that features exciting gameplay, a deep Kingdom system, and a Kingdom-building MMO experience. There will be a Kingdom of players who you will have to outmaneuver and outplay to emerge as the Kingdom’s new ruler and have Saladin talent Tree as your Commander.

He is the best pair for Saladin in the game. G.Khan will bring more insane nuking damage and you will have one of the best-nuking pairs in Rise Of Kingdoms. With Saladin and G.Khan pair you will destroy Richard and you will make so much damage. This combo is insanely good for rallying objectives also.

This combo is best if you do not have G.Khan. Cao Cao will bring nuking damage, mobility, and most importantly he has a 10% chance to earn 100 rage points. Great combo and for extra mobility use Cao Cao talent tree build.

Well this is ok combo if you do not do not have other legendary cavalry commanders. Pelagius will add value to Saladin with healing, high damage, and defense stats and most important Pelagius will get more rage. But I would not recommend you to use this combo for rallying objectives.

Active Skill
Deals direct damage to the target, then reduces target march speed and decreases healing effects received for the next 5 seconds

Deals direct damage (Damage Factor 1700) to the target, then reduces target march speed by 50% and decreases healing effects received by 50% for the next 5 seconds.

Saladin was the first Muslim sultan of Egypt, Syria, Yemen, a Palestine, the founder of the Ayyūbid dynasty, and one of the most-famous Muslim heroes of all time. Saladin fought against the Christian Crusaders, most notably against Richard the Lionheart during the Third Crusade. In 1187, Saladin inflicted a crushing defeat on the army of the Kingdom of Jerusalem and recaptured the holy city which had been occupied by the Franks for nearly nine decades.

In contrast with the bloodbath the Crusades had inflicted on Jerusalem, Saladin acted with great magnanimity to the city´s Christian and Jewish residents. He allowed women, the old, and the poor to leave without paying a ransom. Saladin has been considered by many to be the ideal of a Warrior-King: terrible in battle yet generous to his enemies.

Despite their different beliefs, Saladin was highly respected by Richard, who praised him as undoubtedly the greatest and most powerful leader in the Islamic world.In 1192, Saladin and Richard signed a truce. Saladin died the following year – after giving away much of his personal wealth to his subjects – but the Ayyubid dynasty continued to rule in Egypt and Syria for many generations. Widely revered by Muslim admirers and Christian foes alike, Saladin´s legend still lives on today.