Willows and Flowers: Collect resources in your city, gather resources on the map, and defeat barbarians to obtain Branches. They are usable in the “Branching Out” event.

Branching Out: Use Branches to help your sapling grow and reap abundant rewards. 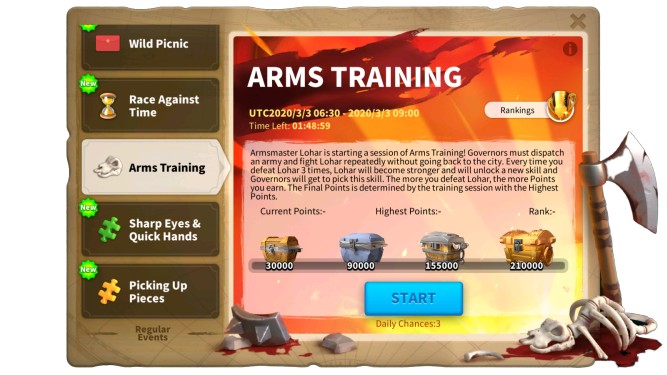 Ascend to the Top: Become a kingdom powerhouse to earn a brand new city theme, Amber Fortress! – Arms Training: Are you prepared for Armsmaster Lohar’s spring training? Lohar grows stronger with each training session; how much can you take?

I’ve added a slew of personal accomplishments. A new achievement category has also been added. Governors can now choose to highlight specific accomplishments in their personal information.

Defeating the chieftains of Barbarian Camps and Barbarian Keeps increases the likelihood of receiving equipment blueprints.

For kills that happen during Kills that occur during rally battles will now be more accurately attributed to Governors who participated in these battles.

Album display has been improved. Governors who have uploaded a photo will now have a more prominent indicator in their personal information panel.

Imperium Kingdoms’ Special Immigration chances will now accumulate at the beginning of each month if not used up, up to a maximum of three chances.

The top 1000 Governors will now be displayed in all individual rankings. A new ranking of personal accomplishments has been added.

Double-tap your army’s avatar on the right to quickly select all troops in that army.

Minor changes were made to the area attack skills. These skills will now select targets from all enemy Governor troops currently attacking you and within the skill’s area effect.

Practice Matches have been added to the Ark of Osiris. From Mondays to Fridays, alliance leaders or titled officers can spend Gems to unlock a Practice Match session for alliance members to use.

The battle results mail for the Ark of Osiris has been improved. Individual healing statistics, among other things, are now displayed in the mail.

During the Ark of Osiris, alliance skills and commander equipment will function normally.

During the Osiris League, cheer on your favorite alliance in a brand-new betting event!

After the Osiris League enters the Playoffs, the skills system will be added. Show off your mind-blowing abilities!

During the Ark of Osiris, locked commanders can now be dispatched as normal.