If you are an archer player you can invest in him. Cyrus the Great can be used for field battles and for Rallying objectives. He has a lot of nuking damage and defense skills that is helping a lot.

Well, this is the best talent tree for Cyrus the Great. It is for field fights. You will get a nice nuking bonus and rage generation that will help you cast your skill more often. On top of that, you will get a nice bonus in stats so you can deal even more damage and survive more. 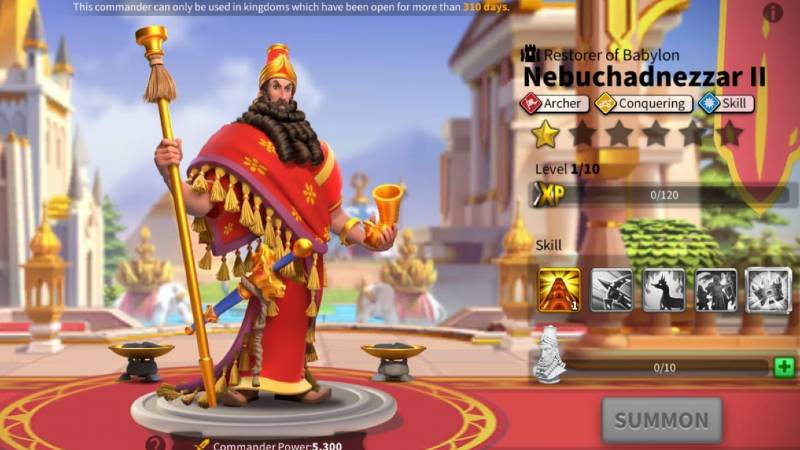 Nebuchadnezzar and Cyrus pairing is an obvious one. Together they have great synergy from defensive stats to nuking damage. They are perfect for rallying objectives in the ark of Osiris or in kvk. Also, they work great for field fighting.

Well you can not go wrong with this pair. It is great for a big fight where you will be able to hide and do a nice amount of nuking damage to more than 3 targets. The only disadvantage for this pair is that you can get focused a lot and because YSG does not provide any defense stats you will get destroyed fast.

For other pairings for Cyrus the Great, You can use any archer commander with great nuking damage like Ramses and Edward.

This skill is great. You will do a lot of nuking damage and in addition to that, you will make the enemy take more damage so his pair will be able to do more nuking.

Not bad for archers who are very easy to destroy. Also 15% bonus march speed will help you escape if you are getting focused on-field battles.

When troops led by this commander consist only of archers, their normal attack gains a 10% chance to deal additional damage over time for 3 seconds (Damage Factor 250). While the damage over time is in effect, the target deals 40% reduced skill damage. This effect can trigger at most once every 5 seconds.

This skill is powerful against other nuking commanders. You will deal additional damage but on top of that you will reduce enemy target nuking damage by 40% which is huge.

Passive Skill When attacked on the map, troops led by this commander have a 10% chance to deal adamage over time in a circular area of effect to up to 3 targets for 2 seconds (Damage Factor 300). This effect can trigger at most once every 5 seconds.

When you are in big fights this skill will help you a lot. It will deal damage in the Circular area. It is great for big fights like Ruins in KVK.

King of the World

New Skill After using an active skill, archer units led by this commander gain 20% increased attack and 20% increased defense for 3 seconds, and gain an extra 50 rage per second. This effect can trigger at most for every 5 seconds.

Cyrus II, better known as Cyrus the Great, was the founder of the ancient Persian Empire. Starting as a local leader in the southwest of present-day Iran, a series of victories rapidly gave him control of Medes, Lydia, and Babylon uniting most of the Middle East. Eventually. He bult a vast empire stretching from India to the Mediterranean. While Cyrus was a military genius, he was also known for his mercy. After defeating his grandfather, a man who would gladly have killed him, Cyrus instead spared his life. Upon capturing Babylon, he released all the slaves there, granting them safe passage to their homeland.