Cao Cao is one of the first legendary cavalry commanders in Rise of Kingdoms. Cao Cao is a great nuking commander for PVP and PVE. With him, you will be able to destroy barbarians’ forts easily. Overall great commander to have in a collection.

Cao Cao, courtesy name Mengde, was a Chinese warlord and the penultimate Chancellor of the Eastern Han dynasty. As one of the central figures of the Three Kingdoms period, he laid the foundations for what was to become the state of Cao Wei and was posthumously honored as “Emperor Wu of Wei”. He is often portrayed as a cruel and merciless tyrant in subsequent literature; however, he has also been praised as a brilliant ruler and military genius who treated his subordinates like his family. Cao Cao had much success as the Haan chancellor, but his handling of the Han emperor Liu Xie was heavily criticized and resulted in a continued and then escalated the civil war. You can see that Cao Cao was a great military genius and brilliant ruler. I would recommend you to learn more history about Cao Cao from Wikipedia and Britannica

This in-depth guide is great for the new and old rise of kingdom players. In this in-depth guide, you will learn everything about Cao Cao’s skills, mobility talent tree, how to use him in old and new kingdoms, etc. You will understand that Cao Cao is worth having and investing.

Cao Cao is one of the legendary commanders that you can get in the golden chest but also you can buy it from daily special offers. When you buy a special daily offer you will get Treasure that can contain Cao Cao sculptures inside. These chests are given every day and you are guaranteed to get at least one Cao Cao sculpture from 3 chests. So if you are big spenders feel free to buy all 3 chests. It will speed up your process of maxing Cao Cao.

You will need 680 Cao Cao sculptures to max him but when you add sculptures from gold chests and daily offers you will max him very fast.

Cao Cao is one of the commanders that you will use all the time. He is a very special commander. He is insanely good for new kingdoms but when your kingdom gets older his power will be lower. There will come new commanders who will be much stronger like G.Khan, Attila but still, you will use Cao Cao on a daily basis.

You will use him every day primarily because of his great talent tree.

Now the Cao Cao mobility talent tree is great in old kingdoms, for getting runes, capturing buildings in AOO, getting Ark in AOO, hunting, and gathering troops. Possibilities are insane. The only problem with this talent tree is that it is not for PVP. So if you are in an older kingdom use this talent tree and avoid fighting against strong players. You will get destroyed.

This is the best duo for barbarian forts killing. You will use Boudica as primary and Cao as a secondary commander. All you need is cao cao first skill and with Boudica nuke, you will melt barbarian forts

This is one of the best nuke duos in games. The amount of nuke is insane and if you see archers on field, focus on them. They will melt from dmg. This duo you can use for killing barbarian forts. Use Minamoto no Yoshitsune as primary and Cao as a secondary commander

This is a f2p duo if you do not have Minamoto. Pelagius will provide defense and some healing and Cao Cao will nuke targets. Do not kill forts with this combo because it will be slower. Better is to use Boudica and Cao.

Dragon Rider is the best Cao Cao skill. it will deal great amounts of nuke damage and reduce enemy troop’s attacks by 40% and march speed by 10%. The duration is 3 sec and that is great.

This skill is useless for PVP but it is great. Why? You will be able to destroy barbarians forts without problems especially if you are a new player. An overall great skill for new players.

Passive Skill
Troops’ normal attacks have a 10% chance to heal a portion of the slightly wounded units, restores rage, and increases troops’ march speed by 20% for 3 seconds. Effect can only trigger once every 2 seconds.

This skill is ok because there is a 10% chance to be activated. It will restore 100 rage so you will be able to use your primary skill faster and on top of that, your troops will be healed by 1000. Also, you will be able to get a 20% march speed which is great when you’re hunting-gathering troops. 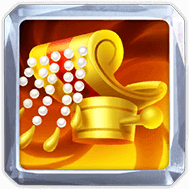 Emperor Wu of We

Expertise skill is ok. Nothing special.