Nebuchadnezzar II has the best archer talent tree in rok. It is a combination of Skill, Archer and Conquering. Nebuchadnezzar II is available for kingdoms that are open for more than 310 days.

Nebuchadnezzar II had great skills and talent tree and that together makes him very strong. He is excellent for aoo where there are a lot of Infantry commanders who are defending objectives.

Nebuchadnezzar II is also excellent for KVK simply because he is using archers. Archer troops are the weakest troops on-field battles because all players are focusing on them. Most players do not care how much archers troops will die during a rally on objectives and that is why he is great for KVK.

When you look at Nebuchadnezzar II’s skills and talent tree you can see that he is designed for rallying objectives. Also, he has a small ants swarm system where he can hit more players who are in front of him.

The only problem is that this commander is not free to play friendly. First, he is the archer commander and most of the players will focus on you first, second, he does not have a lot of skills for field fighting so it is better to use him only for rallying objectives.

This skill is great. nice amount of nuke damage and a small anti swarm system.

This talent tree is ideal if you will fight on the field. Nice combination of skill damage and archer stats. This will help you a lot to survive more and with that, you will deal more damage. 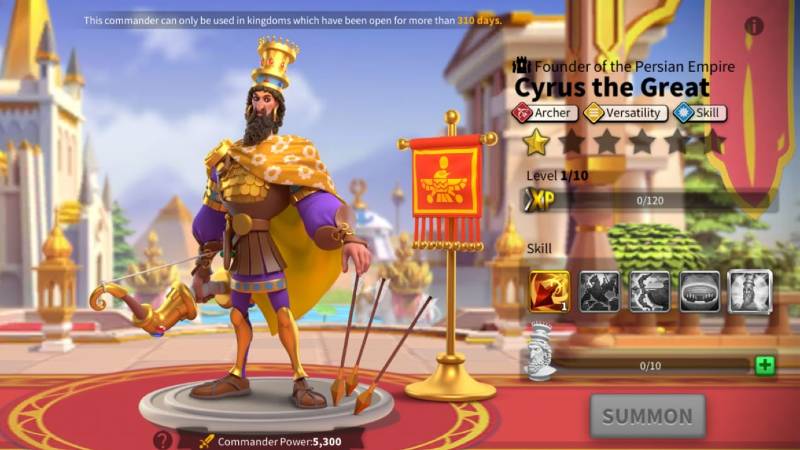 Well, Yi Seong-Gye and Nebuchadnezzar is one of the obvious pairings. Together they will bring an insane amount of nuke and rage generation. The only downside for this combo is that you will get focused and there is a low amount of survivability skills. So use this pairing with caution, avoid going 1vs1. probably it is best to use it in massive fights like in ruins or in the Middle when you are getting ark.

Well because Nebuchadnezzar II is a very strong archer commander you can also pair him with any archer commander. All you need is nuking damage and you are set to go. You can use Artemisia, Edward and Ramses. Only avoid using Tomyris. She is not that great.

Active Skill
Deals direct damage to up to 5 targets in a forward-facing fan-shaped area (Damage Factor 1500). Damage dealt to each target is reduced by 15% for each additional target.

This skill is insanely good for rallying objectives. First, you have a 10% chance to do additional damage. Then you have a 30% counterattack damage bonus which is huge.  When you add this damage with his first skill you will have a powerful nuking commander.

When this commander leads a rally attack, counterattack damage is increased by 30%, and incoming attacks have a 10% chance to deal direct damage to the attacker (Damage Factor 800) and reduce their march speed by 30% for 3 seconds. Cooldown: 5 seconds.

To activate this skill you will have to use only archer troops. So if you rally with Nebuchadnezzar II you want to check who is joining in your rally and kick all troops who are not archers. 15% bonus speed is big when for AOO because every second matters and when you launch a rally, enemy troops will have less time to prepare a defense. On top of that, you will receive 30% bonus defense. Archer troops are weakest and this will help them to survive more.

When you are using Nebuchadnezzar II as leading commander your troops will receive a bonus of 15% damage which is huge and on top of that, you will reduce enemy target rage so he will need more time to cast the skill.

Troops led by this commander deals 15% increased damage, and each normal attack has a 10% chance to reduce the target’s rage by 100. This effect can trigger once every 5 seconds.

With Expertise: Deals direct damage in a forward-facing fan-shaped area to up to 5 targets (Damage Factor 1500). Damage dealt to each target is reduced by 15% for each additional target. At the same time, deals additional damage to the current target (Damage Factor 500).

Nebuchadnezzar II was the longest-reigning and most powerful monarch of the Neo-BabyIonian empire, ruling from 605-562 BCE. Nebuchadnezzar was a brilliant general who spent much of his reign conquering nearby kingdoms, fighting the Egyptian empire, ang putting down many rebellians in vassal states. His most famous military acts include his two sieges of Jerusalem 597 and 587 BCE, and his destruction of the Temple of Solomon after the second siege. t significant legacy in modern times, however, is not as conqueror, but rather as a builder. Most of his time and energy spent outside of the battlefield was dedicated to building up his capital city of Babylon. He rebuilt temples, canals , and built many new fortifications, including a moat surounding the city walls. Nebuchadnezzar is also said to have built the fabled Hanging Gardens of Babylon to remind his queen of her homeland, Media.