Eulji Mundeok is an open-field infantry commander. His skills focus on dealing a lot of damage and defense stats on new kingdoms. His skills are rather powerful and make him a really good choice to use in the open field.

If you have been considering investing in Eulji Mundeok, keep reading. This article will cover everything you need to know to make an informed decision before putting your money on Eulji Mundeok. In addition, we will cover how to obtain him, go over his skills, and evaluate possible talent builds and the best pairings that you should consider should you choose to invest in him.

Is Eulji Mundeok a worthwhile commander to invest in 2023?

The answer is yes! Eulji Mundeok has a robust set of skills that will bring a lot of value to your game. So you should definitely consider investing in him. If dealing large amounts of damage to your enemies is your favourite way of playing the game, Eulji Mundeok is the commander for you!

His active skill has a massive damage factor that makes him a formidable enemy, so you would definitely want to use him in battle. However, the main drawback of using Eulji Mundeok is that he does not have a skill tree, so that is one thing you will notice the absence of from him as a commander. He has some solid pairings, and the only place he is lacking is his trees.

But overall, investing in Eulji Mundeok is a good idea in 2023 for new player.

How can you obtain Eulji Mundeok?

Obtaining Eulji Mundeok is reasonably simple and straightforward. First of all, if you began your game with the Korea Civilization, you will already have this character. Secondly, you can easily obtain him the same way you would any other commander, which is by getting him from the silver and gold keys. Thirdly, you can also compete in the expedition and convert all of your universals to Eulji Mundeok. Lastly, there will be a Korea event where you can obtain up to 20 Eulji Mundeok sculptures. These are the different ways you can obtain Eulji Mundeok.

Eulji Mundeok has the infantry tree, garrison tree and the attack tree. This is a pretty unique combination, and you usually don’t see an epic commander with these three trees. The biggest thing that is different is that he doesn’t have a skill tree. So let’s take a look at some builds that would make the most sense for having Eulji Mundeok as a commander. Do remember that these are only suggestions, and you can always use some different builds that you have had a good experience with.

For this tree, you should first get ‘effortless’ so that you can increase damage by 2.5% every 10 seconds. This adds to Eulji’s already high damage factor. Next, ‘burning blood’ will help provide the rage generation that Eulji Mundeok needs. Next, ‘Lord of War’ will increase attack by 9%, and finally, you should get ‘armored joint’ to reduce damage taken.

Since Eulji Mundeok is an open field infantry commander, you will want to maximize the infantry tree. To do this, first, go to the top of the infantry and get ‘elite soldiers’, which will increase the attack, health and defence of your infantry army by 2.5%. Of course, this is only applicable when the entire army has one troop type, which is the infantry troop type. Then, for rage generation, get ‘undying fury’, which you will find helpful because Eulji Mundeok does not have a skill that generates rage.

Next, you should get ‘call of the rage’ which will increase your defence by 6% when your army has a strength of 50% or lower. ‘Iron spear’ will increase damage dealt to cavalry units. It would be best if you also got ‘strong of body’ to get a 6% infantry health buff. Last of all, you should get ‘snare of thrones’ which will slow down your target, which is useful because infantry units are quite slow, and ‘hold the line’ will give you some tankiness with the 10% chance to reduce damage taken by 20% for two seconds.

Here we will talk about some of the best commanders that you can pair with Eulji Mundeok. These are just suggestions, and again, they totally depend on you. These are a few of the best ones that we have come across.

This is the best pairing for Eulji Mundeok. Sun Tzu will buff your infantry health by 10% and also will bring into the picture a rage engine that Eulji does not have. This pairing will have a full infantry army since Sun Tzu, too, is an infantry commander. Sun Tzu would make a better primary because Sun Tzu has the skill talent tree that Eulji Mundeok lacks. However, Eulji being primary, will help power off Sun Tzu’s debuff. Overall, Sun Tzu is a better primary because the skill tree is pretty valuable.

This pairing will lack synergy because Boudica is not an infantry commander; she is a universal commander. She has a high single target damage which goes very well because Eulji Mundeok is an open field commander who values attack power above all else. She should be placed in the secondary commander position, and Eulji Mundeok should be the primary commander in this pairing. Her damage will be powered off when the 30% defence debuff is active. She will not only decrease the attack of the enemies by 20% for two seconds but also do significant damage to them. She has an immense rage generation, which makes up for Eulji Mundeok’s lack of it in his skills.

Osman 1 relies on a powerful rage generation that Eulji Mundeok cannot offer, but this pairing is still something that does make a bit of sense. The other two mentioned would make a better pair, however. Together, they will have a considerable defence debuff. Osman 1 deals a direct damage factor of 400 and, on the next turn, 1100 damage factor. This is a massive amount, and the only reason you should consider this pairing is the considerable damage factor dealt. It also offers 10% more troops. Osman talent tree is better for attacking objectives.

These are Eulji Mundeok’s four skills. Since he is an infantry commander, his skills focus on target damage and defence. They are pretty powerful skills and make him a worthwhile commander to invest in and will bring a lot of value to your game.

Active Skill
Attacks the target and deals massive damage. Decreases defense of the target for 2 seconds.

This is Eulji Mundeok’s first and active skill. It requires a rage of 1000. This skill is his best skill and will deal a massive damage factor of 750. It also decreases the defence of the target by 30% for two seconds. So clearly, this skill is what makes Eulji Mundeok such a valuable commander in the rise of kingdoms and makes him arguably one of the best open-field infantry commanders in the game.

Passive Skill
Increases garrison defense when this commander is service as garrison commander.

‘Cold Welcome’ is Eulji Mundeok’s first passive skill and second skill overall. It increases the garrison defence by 5% while Eulji is serving as a garrison commander.

‘War and Peace’ is Eulji Mundeok’s third skill and is also very powerful. It deals a 10% attack and 10% defence to infantry units. This is a solid skill and makes him a popular character, especially among free-to-play players.

Passive Skill
When attacked, Eulji Mundeok has a 10% chance to increase his own troops’ damage on the next turn.

This is Eulji Mundeok’s final skill and is called ‘strike back.’ It gives the player a 10% % chance to increase his own troops’ damage by 100% on the next turn when attacked. So it gives a 10% chance of doubling the damage, and with more and more enemies, it has a higher chance of going off. 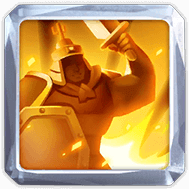 Eulji Mundeok was born in the mid-6th century and died sometime after 618. As one of the most distinguished military leaders of the Goguryeo period, Eulji Mundeok’s leadership and tactical acumen were the decisive factors in defeating the Sui invasion. Facing numerically superior forces, he developed a strategy that allowed him to secure a decisive victory. Such brilliant tactical success earned him a permanent place among Korea’s most famous leaders. Kim Bu-sik, the author of the Samguk Sagi, also attributed the victory over Sui to Eulji Mundeok. Nowadays in Korea, Eulji Mundeok is recognized as one of the greatest figures in its national history.

Eulji Mundeok makes a powerful infantry commander, and you should consider investing in him for serious damage and defence. His powerful skills like ‘water attack’ and ‘war and peace’ are extremely strong, and you would want to be able to put them to use on the battlefield. However, his main quality is his ability to battle out in the open field. So if this is a quality you are looking for in your next commander, Eulji Mundeok is the one for you!

So, if you have decided on Eulji Mundeok as your next Rise of Kingdoms commander, you should consider all the suggested builds that we have mentioned. Also, try your best to pair him with Sun Tzu, as this pairing will bring a lot of value to your game.

In conclusion, you should invest in Eulji Mundeok as a commander in Rise of Kingdoms!