Lohar is the best peacekeeper in the Rise of Kingdoms. His role is pretty special compared to other commanders because he was basically created to be used in a player vs. environment setting (PvE), so his expertise lies in killing barbarians.  He has a very specific role in the game that no other commander can take. But without context, his importance can be easily overlooked. His skills revolve around damage to barbarians and healing potential.

If you are considering investing in Lohar as a commander, this article should give you some insight to make an informed decision. Without wasting any more time, let’s begin!

Lohar is designed to destroy barbarians. A lot of healing, a bonus of 35% damage to barbarians and 70% experience gain. When you start fresh on a new server or it is your first time to play Rise Of Kingdoms you must get Lohar. He will speed up your leveling commander process and you will be able to destroy barbarians very fast.

For field fighting he is ok on the new server but on old where people have max commander is not.

Because he is designed for barbarians he does not have a lot of relative skills for field fighting and you will get focused a lot during fighting because people know how easy is to kill Lohar.

If you do not have other commanders to fight then you can use him but try to avoid using him for field combat.

For destroying barbarians you will use Lohar as primary commander and commander that you want to level up as secondary.

Before starting, it is crucial to elaborate on the difference between Player VS Player games and compare them to Player VS Environment games.

Player VS Player games are focused on playing against other gamers online. On the other hand, Player VS environment games stay focused on the gamers playing within the game. This involves barbarians, guardians, marauders, barbed forts, among other things.

This distinction is important because Lohar is a character that has been made especially for Player vs. Environment games, so continue reading with this in mind.

How to obtain Lohar In Rise Of Kingdoms?

This is an important part of Lohar that we need to talk about because you cannot obtain Lohar through the silver and gold chests, nor can you buy him the way you would other commanders. There is actually a very specific way to obtain Lohar.

There is an event, namely ‘Lohar’s Trial,’ which you will come to know about through the event calendar. So during the time period of this trial, if you kill a barbarian, you will receive various items like Lohar’s crossbow or arrows, and using these items, you can summon Lohar.

After you summon him, you must defeat him after forming an alliance with nearby commanders, and with a small army, you can easily defeat him.

This is a tricky question because Lohar has some major ups and downs. The simple answer is that it depends; let me elaborate on why.

Lohar is, first and foremost, a peacekeeper. He specializes in PvE games, and that’s where he would be the most useful, but in PvP (Player vs. Player) content, you won’t see the same value. So, if you prefer PvP content, Lohar is not for you.

However, if you are interested in PvE content, then Lohar is a great choice because he is an expert peacekeeper and can also cause damage to barbarians. He also has a considerably high healing factor and has a skill that will bring more experience to all of the commanders in Lohar’s army.

Another thing that I should point out is that obtaining Lohar, as I mentioned above, is not too difficult. So if you are considering investing, perhaps you should first consider going through the ‘Lohar’s Trial’ and obtaining him instead.

Keep reading, and all of these will be elaborated on more. Once you reach the end of the article, you will know whether or not Lohar is the commander for you.

Lohar’s talent trees are the integration tree, the support tree, and of course, the peacekeeping tree. It is pretty obvious that if you are playing PvP content, this is not the best combination of trees and will not be very useful to you.

The peacekeeping tree does contain the rejuvenate talent and cage of thorns, but it does not even come close to the trees of other commanders.

The integration tree, too, is not the best because it is not really meant for a specific kind of troop. It makes more sense when the army is mixed with all different kinds of troops.

Lastly, Lohar’s talents in the support tree, too, are not very useful in the context of PvP games.

The talent trees are not too important, considering that you will ideally not be using Lohar for PvP content, but the best thing you could do is maximize your peacekeeping tree. This can be done by first getting quick study, trophy hunter, and then double-edged sword.

Next, let’s move on to the support tree, where you should rejuvenate for some extra rage generation. It will give you an extra 150 rage which is pretty useful for the game. Next, you should get a feral nature which will restore 100% of your rage.

The best build that you can get is this, and you should really prioritize maxing out the peacekeeping tree because it will really bring a lot of value to your game with Lohar. 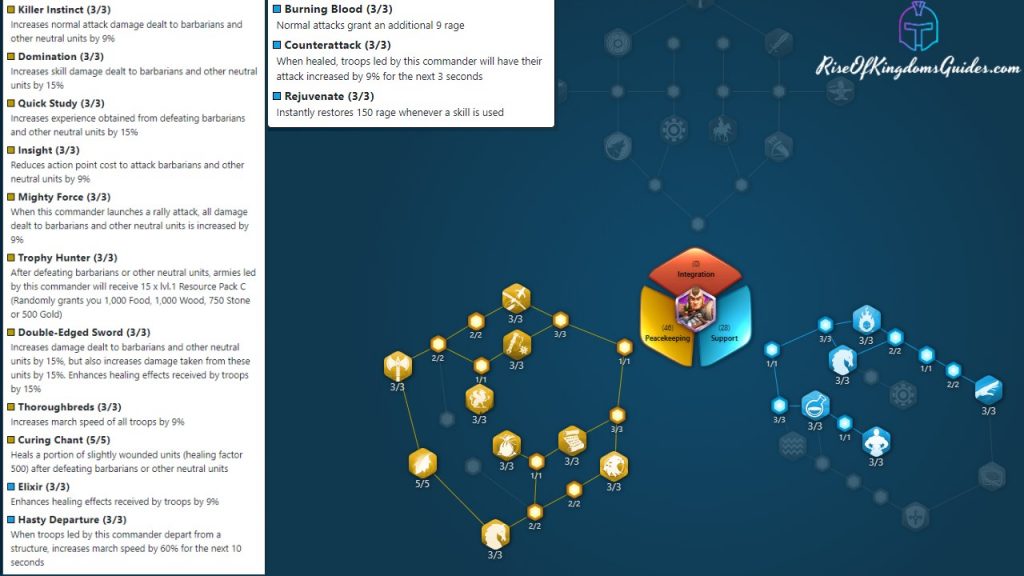 Aethelflaed – She is a great commander you can pair with Lohar. With her abilities, she can debuff the enemy’s attack, health, and defense reduction. She also has a passive skill that can give bonus damage to the barbarians. They are a great combination for the farming-chain barbarians quickly and easily. In this pairing, Lohar should be the secondary commander because aethelflaed has the ability to hit multiple enemies with her active skills.

Boudica – Even though Boudica does not have debuffs, her passive skills can restore rage and also heal her troops while restoring rage. This increases the total healing and damage when they are fighting with the barbarians. Boudica gains damage to barbarians. This makes them a great pair. In this pairing, Lohar should be the primary commander. It is because of the active skills of Boudica.

Since Lohar is a peacekeeper, his skills are not too impressive. They are mostly focused on PvE content which means they will not be as useful if you mostly play PvP content. They focus on killing Barbarians, Marauders, and Guardians. They also have considerable focus on healing, which makes sense because Lohar is a peacekeeper.

Active Skill
Deals direct damage to a single target and heals a portion of your army’s slightly wounded units.

This active skill needs to be maxed as soon as possible. This allows him to deal a great deal of damage to a single enemy and also heal his wounded troops at the same time. This is much better when Lohar has a good rage restoration which is because of his partner or talent build.

Passive Skill
Increases experience received by all commanders in the current army.

This skill gives Lohar and his partner a bonus when they defeat neutral units and barbarians. The huge bonus they get is 70%. This shortens the time taken to level up the commander of your choice.

This is a great passive skill that reduces the number of wounded troops when you require some barbarians farming. This helps you use fewer resources for healing from the hospital. 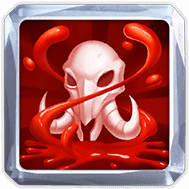 Order in which you should max out Lohar’s skills

Let me talk about the order in which you should max out his skills when you use Lohar as a primary commander. Initially, in the game, you should place more focus on maximizing Lohar’s active skills and the first two passive skills. This is because they will provide both healing and damage to barbarians.

So, the best order in which you should maximize the skills is by first maxing out the third skill, “Lohar’s trial,” then moving on to the other two, which are ‘Overwhelming Force’ and ‘Sanction.’ Once you have reached four stars for these three skills, then you should work towards unlocking and maximizing the fourth skill.

Lohar, born in a remote barbarian fort, showed a great fighting talent that was beyond his age. He training was very strict as part of the main force for protecting the fort. A hard childhood made him so bored at training even hate, but once he experienced a cruel fight against another fort and fell in a huge fire. He promised that one day he would grow strong enough to protect his fort no matter the cost. When he became a great leader, he met the enemy that burned his fort, he claimed the victory but didn’t achieve his revenge. He combined the two forces in a friendly way and made the force a strong power in his land.