Are you a fan of Rise of Kingdoms? Are you planning to use Charles Martel with Richard I? Do you doubt it’s a good idea? Well, using both of them together would doubtlessly be an excellent idea considering they can both withstand serious damage. Additionally, they both will give you many infantry stats!

He gives the right answer to Attila Takeda by garrisoning a fortress or an eight flag with Constantine. This might depend on multiple factors. However, Charles Martel, just being a part of that Meta, might be proof of how significant he is in the game and for a long time.

You might not say this for many other Commanders like Saladin, Khan, and Caesar. These Commanders have their rallies prominently in Seasons 1 or 2. El Cid is popular for season 1 but, individuals have been trying to use him for defense due to his additional skills. However, there’s no proof that it’s been effective. Therefore, when comparing Charles Martel, you can say that he’s the most Meta out of all the Gold Key Commanders. Don’t think that the others are less skillful or bad.

This Charles Martel Talent Tree Build is only great for defending city, but if you are planning to use Martel as primary commander on the field then go with Tank build.

This Charles Martel Talent tree build in ROK is great for everything. You can use it for field fights, defending, etc. You can not go wrong with this build.

Additionally, Call the Pack is also an intriguing talent. When you go below 50% strength, you will get 6% defense for all your troop types. This talent doesn’t specify infantry, so any troop Charles has will get the benefits. However, you might only want to use him for a full infantry build, so it doesn’t matter.

You can take “undying fury” for rage and “iron spear” for dealing with any extra damage caused to your cavalry units. Undying fury is more of a universal feature, while iron spear is for when you’re attacking cavalry.

Do you want to build Charles Martel to defend your army against swarms or defend your forts and flags? If yes, then your build should be tweets. If you think you have chances of getting swarmed, then you must know your enemy better. This is because when you get swarmed, your damage reduction effects get enhanced by about 9%. This is a great feature Martel has; however, it only applies if enemies surround you.

This feature is good for a Mega Well or anyone who has 50-60 million power. But, if you are someone with a 20-30 million power, then it might not be worth it. This is because new players can get taken down by single rallies, and as mentioned earlier, this feature applies if enemies surround you.

However, it’s a personal choice. If you think you’re going to get swarmed, you should go for it!

King’s Guard is a great feature; it brings you 3% attack and defense. Additionally, you also get 3% health when Martel is a Garrison Commander. A fun fact about King’s Guard is that patch notes came with the latest update.

When you scroll to the bottom of these patch notes, you will find an option that says “Adjustment to Garrison,” which will include King’s Guard. This means that King’s Guard will be effective for all garrison situations.

However, even if it says so in the patch notes, it doesn’t work. Therefore, only take King’s Guard if you think you need to defend flags or forts. When you use this feature for flags and forts, you get that 9% of statistics.

On the other hand, the disadvantage of using King’s Guard and Call the Park is that you need to utilize all your talent points. This means you will need to sacrifice other talents from other places.

One of the best duos for infantry in Rise of Kingdoms right now. I would recommend that you keep Richard as secondary commander because you want to use Charles Martel as primary for defending buildings and city and Richard damage debuff is faster than Richard shield.

Best is to keep Richard’s talents on infantry build and Charles Martel On Garrison. On open field fighting if people know how to play they will not focus you. If you get swarmed by 5 or more troops you will do more damage because of counter-attack if an enemy is not so much stronger than you.

And one more tip is never run with a full infantry march because you can not escape and you will lose so many troops for nothing. While you run you do not generate rage. 1vs1 fighting is not worth it, you want your Richard to get swarmed for counterattack damage.

This is a duo you want to go with because you will use Richard and Alexander the Great duo. You can hit 5 targets at the same time and with Martel defense, you will be hard to kill.

So do not be scared going in group fights with this combo. It’s great combo for Ark of Osiris because you will have group fights all the time. You can use the Sun Tzu talent tree for additional rage generation and skill damage.

I would not use this duo because it is not so great. But if you do not have other commanders to use then go with this duo. For more skill damage use Eulji talent tree.

It is a nice duo because it will be hard to kill you. Ultimate tank duo. If you are F2p it’s hard to get this duo but if you are p2w you must have it, it’s so strong. And a bonus is that you will help your teammates with a shield from Alex. Use Alexander as secondary commander because alexander’s talent tree is not that great.

Active Skill
Charles activates a shield that can absorb massive damage ( Damage Factor x)for the next 4 seconds. Also increases troops’ damage by x% while the shield is active.

The first and foremost skill that prominently makes him stand out and one of the best is “Shield of Francia.” This skill made him powerful right out of the gate; no other commanders had shields as powerful as his.

Charles Martel activates this shield to absorb massive amounts of damage (factor 1200) for four seconds. When you activate this shield through the commander, it spikes the troops’ damage by about 30% when it’s in play. This quality makes him more damage resistant; Richard I reduces the damage by a particular percentage. Richard I also heals troops that are slightly wounded to bring them to the battlefield.

Heavy Infantry is a passive skill that enhances infantry units’ defense and health by 15%. The Health Stat makes him more powerful because it’s the most difficult state to raise artificially.

You can boost your attack and defense by a certain percentage with tools; however, there’s nothing for health. Additionally, not a lot of Commanders bring you Health benefits.

Passive Skill
Increases watchtower defense by x% and garrison damage by when this commander is serving as a garrison commander.

Uncrowned King is a passive skill that increases your Watchtower defense and Garrison attack by 8%. This is, of course, when Charles serves as a Garrison commander.

Watchtower defense isn’t an important quality; however, Garrison attack is quite significant. A garrison attack is your personal Garrison, not an attack for a particular troop type like infantry.

This skill increases your troop’s counterattack by 30%. This is an extremely beneficial skill when you get rallied by multiple targets or swarm your city or flag. During these times, you will deal with a lot of counterattack damage in these armies.

He doesn’t have a particular limit of dealing with counterattacks; it’s always there. Therefore, Charles Martel is great for defending objectives like flags and forts. 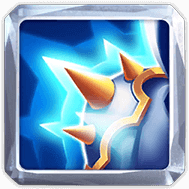 Rise from the Ashes

This changes his second skill; instead of 15% of defense and health, you get 20% of both. Additionally, you also get 20% March speed. Using this commander’s skill brings in more infantry buffing stats than Richard I and is faster on the battlefield.

Note: Remember that it will take you 690 gold sculptures to expertise your Legendary Commander. Even if it seems crazy, it’s still needed. If you’re trying to make him an expert only with gold keys, it will take you a lot of time.

Martel works great as a five-five-one-one; if you want to level up this commander, it’s best if you keep him below level ten. While you do that, ensure that you bring his skills to a level five. If you’re a free player, using him at five-five-one-one is a great idea, and you might want to put him on your wall.

Charles Martel was a Frankish statesman and military leader who as Duke and Prince of the Franks and Mayor of the Palace, was the facto ruler of France from 718 until his death.

In 732, the army of the Umayyad Caliphate led by Al met Frankish and Burgundian forces under Charles in an area between the cities of Tours and Poitiers, leading to a decisive, historically important Frankish victory known as the Battle of Tours, ending the “last of the great Arab invasion of France”, a military victory termed “brilliant” on the part of Charles.

Charles is also considered to be a founding figure of the European Middle Ages. Skilled as an administrator as well as a warrior, he is credited with a seminal role in the emerging responsibilities of the knights of courts, and so in the development of the Frankish system of feudalism.

You know some of the most important things about Charles Martel now- his skills and talents. As mentioned above, he’s great for defending objectives. However, he’s also good in open fields and proves to withstand good amounts of damage.

You have other commanders better than him, but this is an additional feature. This player is a great commander in both primary and secondary roles.

Rise of Kingdoms has had about 60 million downloads since its release. And now that you understand everything important regarding one of its best “tanky” players, what are you waiting for? Go and use him and his abilities to meet your needs as soon as possible!