Alexander the Great is one of the best infantry commander in the Rise of Kingdoms. He will bring an insane amount of damage and defense to infantry troops while supporting other troops with damage absorbing shield. Alexander is a commander that you must have.

However, these are just suggestions, and it totally depends on you and how you want to go about the game.

Moving on to the infantry tree, some of the talents you should focus on obtaining in this tree are, first of all, “Iron Spear”, which will deal extra damage to cavalry units. “Undying Fury” will help generate additional rage, while “Double Headed Axe” will increase attack damage, making Alexander the Great even more powerful.

Next, you should get “Call of the Pack”, which will increase defense when the army is low on strength, as well as “Strong of Body”, which will grant the infantry troops additional health by 6%. “Hold the Line” will help reduce damage taken by the army, and “Snare of Thorns” will help reduce the march speed of the opponent, which is valuable to help neutralize the infantry army’s already slow march speed. Last of all, you should get “Elite Soldiers”, which will increase both the defense and health of infantry troops. 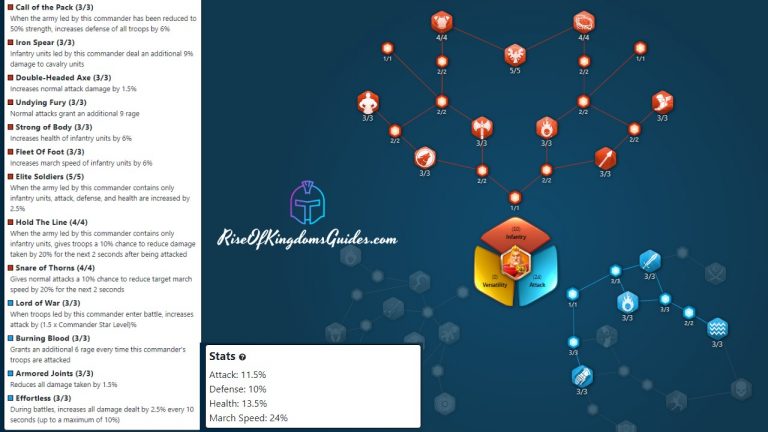 Alexander the Great is a legendary infantry commander in Rise of Kingdoms. His main value point is his tankiness, and he has massive endurance as well as attack. He has one of the strongest defenses out of all other commanders in the game.

If you are considering using Alexander as a commander in Rise of Kingdoms, then you’ve come to the right place. Here, we will give you a guide on how to obtain Alexander the Great, talk about his skills and talent builds and potential pairings to help you decide whether he is a commander you would want to invest in.

Without further ado, let’s get started.

Is Alexander the Great a worthwhile investment in 2022?

Alexander the great has an insanely strong defence and tankiness. In addition, he has offensive capabilities with his resistance, endurance and attack ability. His skills make him strong enough to defeat any enemy. He also has some really good pairings that further increase his value.

Although, since he is an infantry commander, he does not have a fast march speed. But compared to other infantry commanders, he is comparatively faster. However, he is not suitable to be used in PvE games and is designed specifically for PvP games.

Alexander the great is a great commander in Rise of Kingdoms and will bring a lot of value to your game. You should definitely invest in him in 2022, especially if you are looking for a strong tanky commander who will do a great job at defeating enemies.

How to Obtain Alexander the Great

Obtaining Alexander the Great is fairly straightforward; you can get him from the wheel of fortune after you have crossed 200 days of your kingdom. Other than that, you can also obtain him from the “Card King” event. He is only attainable for players who are later in the game.

It does not really matter too much whether Alexander the Great is a primary or secondary commander, because he will thrive in battle either way. But it is important to remember that he does not have the defense tree, so while using him in the open field, it is best to have him as a secondary commander.

Both Charles Martel and Alexander the great are infantry commanders, which give them considerable synergy. They both thrive in open field battles because of their skills and will prove to be a pair that will be undefeatable. Your battles will be long and exciting with these commanders, and in this case, it does not matter which one is the primary commander and secondary commander. Together, they will be a defensive powerhouse.

This pairing, too, will have a considerably strong defense. Richard and Alexander the Great are both infantry commanders and hence will have a considerable synergy. However, Richard lacks damage. But what he lacks in the damage he makes up for in healing ability and stats. This more than makes up for Alexander the Great’s lack of healing factor. They make a strong pair.

Alexander the Great and Guan Yu are both commanders who have the ability to deal a lot of attacks on the battlefield. Hence they make a good pair. While Guan Yu is renowned for his ability to deal a massive attack, Alexander the Great’s defense is unmatched, and hence together, they will be able to endure the battlefield for a long amount of time. This makes their pairing one to consider.

This is another good pairing. Both Yi Seong Gye and Alexander the Great would make a strong pair because while Yi Seong Gye is one of the best Archer Commanders in the game, Alexander the Great is known for his defense and attack. However, since their troop types are different, they will not have considerable synergy. Nevertheless, they still would do really well in an open field battle.

This pair also would be a good one, as both Alexander the Great and Eulji Mundeok are infantry commanders and will have considerable synergy. Eulji Mundeok has an infantry and attack tree which will bring a lot of value to Alexander the Great, who has the same trees. Together, they can deal considerable damage with their troops. They will last for a long time on the battlefield and will deal a lot of damage to opponents while they are in open field battles.

Alexander the Great’s skills mainly emphasize his defence and tankiness. His skills are extremely powerful and make him a worthwhile commander. Here, I will talk about his active and four passive skills.

Shield of the king (Active Skill)

Alexander the Great has a powerful active skill called ‘shield of the king’ that puts up a shield for 4 seconds and simultaneously puts up a smaller shield for other friendly armies for two seconds. It is also important to note that Alexander’s smaller shield cannot be used by his own army. This is a powerful first skill. It gives him the title of one of the best defence commanders in the game.

This is Alexander the Great’s second skill and is also a passive skill. With this skill, every normal attack gains the 10% chance to give extra damage and also to lessen the target healing effects by 10% for five seconds.

Alexander the Great’s third skill is called the “frontline commander” and is a passive skill. This skill can increase the march speed of the infantry troops and increase their attack by 10%.

“Battle of Chaeronea ” is a passive skill that changes Alexander the Great’s bonus to defence when his shield is activated.

Finally, this passive skill can cover a huge amount of damage of a damage factor of 1200 for up to 4 seconds. Simultaneously Alexander can put up a second shield for other friendly armies which have lesser troops remaining. This has a damage factor of 600 for two seconds. It also increases the damage given to opponents by 30% for 4 seconds.

To summarize, Alexander the Great is a notable infantry commander you would want to invest in. Each and every one of his skills are important and will add lots of value to your game. He will deal a considerable amount of damage and will have high endurance on the battlefield. In addition, his defensive ability is unmatched in the game.

Furthermore, his talent trees are very strong too and will add even more strength to his already powerful skills. His pairings make it clear that whoever you pair him with, you will have a duo with lots of power, defense and attack. The open field battles will be taken to the next level with Alexander the Great as a commander.

In conclusion, you should definitely invest in Alexander the Great as a commander in the Rise of Kingdoms. If you decide to do so, you should consider using the recommended talent builds and pairings we have suggested above.