Pakal II is one of the strongest rally commanders in the ROK. Every infantry player should get him, especially if you are playing Ark of Osiris and KVK.

The downside of Pakal II is that most of his skills are for rallying but that does not mean that you will not be able to use him on the field.

Now When you look at Pakal II skills you will see that he is doing single target damage but what makes Pakal II an overpowered rally commander is insane damage reduction and stats. You will get a 40% bonus health which is the best stats for infantry and 30% attack.

Pakal II’s last skill is too strong. Every time you use the first skill you will get a 20% damage reduction and this can happen every 5 seconds. This is simply too good.

Also, Pakal II has one of the best talent tree combinations where you will be able to get a lot of health and defense and most importantly a lot of rage generation.

Note this is based on his skills description but he needs more testing. We strongly believe that he is Tier s commander and that a lot of players will use him

Deals skill damage to the current target (Damage Factor 1300) and troops led by this commander gain a shield for 3 seconds which can absorb a large amount of damage (Damage Factor 500).

This skill is a single target skill that will do 1300 damage and on top of that, you will also get a shield that can absorb damage.

This skill is insane for infantry commanders. You will get a 30% bonus for health. We already know that the best stats for infantry are health and defense and this 30% is simply insane. Also one of the bonuses that you will get is when this commander launches a rally your damage dealt will be increased by 5%

Passive Skill
When attacking strongholds or cities, infantry led by this commander gain 40% increased attack, and have a 20% chance of dispelling any currently active Slow, Poison, Exhaust, and other weakening effects. This skill can trigger once every 10 seconds.

This skill is also amazing. When you launch a rally on a stronghold or city you will get a huge boost of 40% attack. On top of that, you have a 30% chance to dispel any current active weakening effect

This skill is like an anti swarm system. If enemy players swarm you will get up to 30% of all damage taken. This is a huge skill for KVK and AOO

When this commander launches a rally attack, all damage dealt is increased by 5%. Troops led by this commander deal 3% increased counterattack damage and take 20% less damage from all sources for 5 seconds after using an active skill. This effect

This skill will boost your damage by 5% and counter damage by 3% but what makes this kill overpowered is taking 20% less damage for 5 seconds after using an active skill. This is simply too strong. 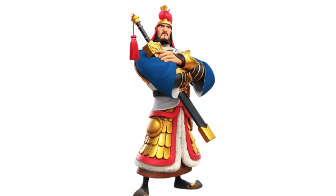 Alex is a fine pair for field fighting. Together they will have a nice amount of infantry stats and survivability especially if you are getting swarmed. But this pair is not good for rallying.

This pair is great. Guan YU will provide indane nuking damage and Pakal II will bring his survivability and stats. The great thing is that if players try to swarm you they will have a hard time. Guan Yu has AOE damage and Pakal II anti swarm system so the only thing that can save you from this combo is refiling objectives.