Diaochan is an epic peacekeeping commander with supporting skills. She is a commander that was created in collaboration between Rise Of Kingdoms and Dynasty Warriors 9.

Diaochan was one of four Beauties of China and she is one of the most popular heroes in ancient china. She is in a lot of games and moves and now she is coming to Rise of Kingdoms. If you want to learn more history about Diaochan you can visit Wikipedia

In this guide, you will find out everything that you need to know about Diaochan in Rise of Kingdoms. We will cover everything from skills to best pairings and where to use her.

Diaochan’s skills are bad and they are focused on PVE which means fighting against barbarians. When it comes to PVP you can use Diaochan but only on new kingdoms. She is not effective in developed kingdoms where players have a lot of great rok commanders.

Diaochan is the great commander for new kingdoms in ROK. She does not have a lot of damage and on top of that you need Lu Bu to have synergy but he is a legendary commander and not worth investing in.

Diaochan has a nice talent tree for fighting against barbarians but for PVP it is not so good.

Diaochan Peacekeeping talent tree build is the way to go. You will save action points and increase damage against barbarians. Also it will provide additional experience and resources. You will get some rage generation also so you can heal your troops and do more direct damage.

If you need paring for other commanders check out Rise of Kingdoms Pairings. 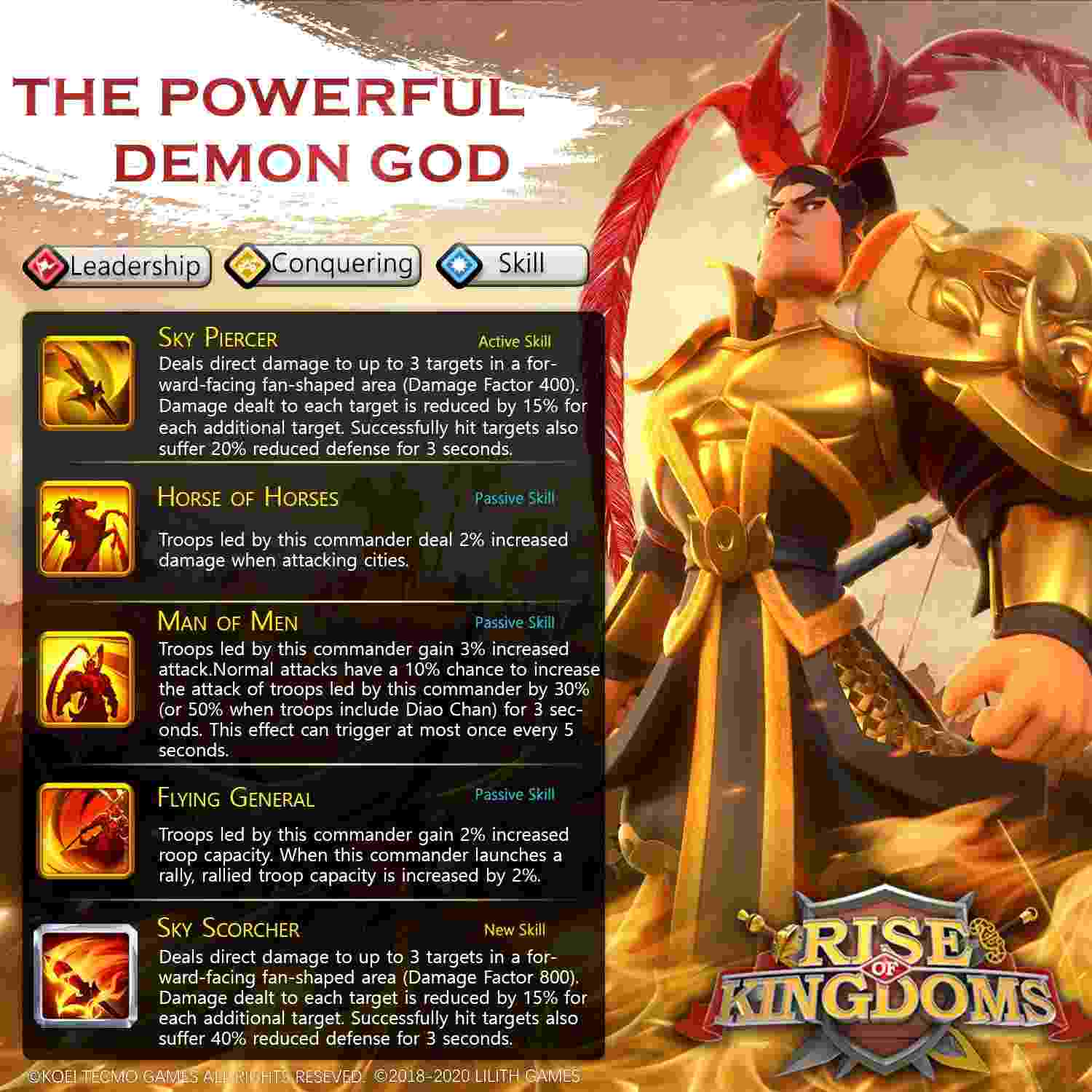 We can see that they have synergy and to get most of Diaochan and Lu Bu you have to pair them together. But there is a high chance that you will not max Lu Bu or you will pair better with him. So I would avoid this pair. Use Lu Bu as the primary commander because Lu Bu’s talent tree is better.

Well, this is great pay for farming barbarians and if you play cavalry. Cao Cao will bring nice nuke damage and cavalry stats. Also he has a small amount of heel that will work great with Diaochan. So if you do not have any other pair you can use this one. If you pair them use Cao Cao as the primary commander because Cao Cao’s talent tree is much better.

Lohar and Diaochan will have a nice amount of healing so you do not have to go back to the city after fighting barbarians. With this pair you will get a lot of experience and max your commanders fast. Overall great pair for new players who are struggling with barbarians.

Joan of Arc and Diaochan are great pair for PVP fighting on new kingdoms. Together they will bring a nice amount of stats, buffs and healing. With this pair you can use any type of troops and it is best to use 3 different types of troops so you can get max from Joan Of Arc talent tree.

Active Skill
For the next 4 seconds, attacks have 100% chance to deal direct damage to target (Damage Factor 150).

This is a small damage factor and it is such a bad skill when you compare it to other Epic commanders that have direct damage.

Passive Skill
All damage dealt to barbarians is increased by 5%. Both commanders gain 5% increased experience for defeating Barbarians.

A great skill for new players who are struggling with leveling commanders and destroying barbarians.

Dance of the Rose

Ok skill for new players who do not have a lot of stats and it is universal so you can use any type of troops with her.

Dance of the Cherry Blossom

Healing is ok but again only for new players. If you are in a developed kingdom this heal will not make a lot of difference in field battles. On top of that, you need to have Lu Bu to get max healing which is not worth it.

For the next 4 seconds, attacks have 100% chance to deal direct damage to the target (Damage Factor 400)