Frederick I is one of the first legendary commanders in Rise of Kingdoms. He was great when Rise Of Kingdoms was released but now Frederick is not so good. Do not invest universal legendary sculptures in Frederick, it is not worth it now and you can get him gold chests.

Frederick is a commander that you will use a lot in the early game of Rise Of kingdoms but later he will lose his value. He is purely single target damage and for an early game, he can do insane damage. He will lose value because later you will get commanders who are 10 time better and stronger commander

But we have a big problem with Frederick if you are not a big spender. Is it worth to invest Frederic your universal golden sculptures? Well if you are on a new kingdom then you can invest a few universal legendary sculptures in him but if you are on the old server just leave him and use best Rise of Kingdoms commanders.

But use only sculptures to max his first and second skill. The rest of skills are not worth getting with legendary sculptures. You will eventually get him on max level with golden keys.

Great for early-stage or Rise Of Kingdom. Boudica will provide nice amount of rage and debufing.

Well YSG is a great commander and you can pair him with Frederic but I would suggest that you use YSG with other commanders.

Great pair for early-stage of ROK, Sun Tzu talent tree and skills will provide a nice amount of infantry stats and also rage. Together they will do nice damage.

Pelagius is a great commander for early stage of Rise Of Kingdoms but later he is not that good. You can pair him with Frederick because Pelagius will bring some nuke nice.

Active Skill
For the next 3 seconds, all attacks have a 80% chance to deal additional damage to the target..

A great skill for single target nuke. If you max skill Frederic this skill will be Enhanced and will have a 100% chance to do additional damage.

Passive Skill
Troops’ normal attack has a 10% chance to heal a portion of the slightly wounded units. This effect can only trigger once every 5 seconds.

Healing is ok but the problem is that you can benefit from this skill every 5 seconds and you have only a 10% chance to get it.

Passive Skill
Increases all damage when attacking other Governors’ cities. 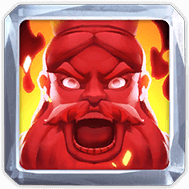 For the next 3 seconds, all attacks have a 100% chance to deal additional damage (Damage Factor 800) to the target.

Frederick I, also known as Frederick Barbarossa, was the Holy Roman Emperor from 1155 until his death. Historians consider him among the Holy Roman Empire’s greatest medieval emperors. He combined qualities that made him appear almost superhuman to his contemporaries: his ambition, his skills at organization, his battlefield acumen and his political perspicuity. Among his contribution to Central European society and culture include the re-establishment of the Corpus Juris Civilis, or the Roman rule of law, which counterbalanced the papal power that dominated the German states since the conclusion of the Investiture Controversy. Frederick died in 1190 in Asia Minor while leading an army in the Third Crusade.