Theodora is a legendary commander. She is a very strong commander for defending objectives. Theodora can only be used in kingdoms which have been opened for more than 310 days.

Rage Requirement: 1000
Deals damage (Damage Factor 600) to up to 5 enemies in a circular area. Damage dealt to each target will be reduced by 15% for each target after the first.

This is a skill that has the ability to hit 5 enemies around her. However, the damage of her attack decreases by 15% for each enemy strike, this is still quite a useful skill when she serves as a garrison commander. She has the ability to handle multiple enemies when in PvP.

Passive Skill
When commanding the garrison, all troops under Theodora’ s command gain +2% defense, and damage taken from rallied armies is reduced by 2%.

When Theodora is serving as the garrison commander, all the troops under receive bonus defense and they incur less damage when facing rally armies.

This is a powerful skill that improves her garrison ability. When at max level, Theodora’s army gains 10% damage reduction and 10% more defense from the rally armies. This skill in total increases damage reduction by 15%.

Passive Skill
All troops under Theodora’ s command gain +2% attack. While Theodora’ s army is at more than 50% strength, her troops deal an extra 2% damage.

This skill gives all the troops of Theodora gain an attack bonus of 10% at max level. When Theodora’s troops are at more than 50% of their strength, they will deal 10% more damage at the max level. This skill activates only when the strength of her troops is more than 50%.

Passive Skill
When commanding the garrison, each time Theodora’ s troops take damage, they have a 10% chance to gain a 10% damage bonus for 3 seconds.

With this skill, when Theodora is acting as the garrison commander, her troops have a 10% chance to gain extra damage for 3 seconds. This is an excellent passive skill that boost’s her fighting abilities by giving her troops a chance to deal 40% more damage whenever they get attacked for 3 seconds.

Honor to the Last

Without Expertise
Deals damage (Damage Factor 1400) to up to 5 enemies in a circular area. Damage dealt to each target will be reduced by 15% for each target after the first.

With Expertise
Immediately removes any slow and control effects from Theodora’s troops, then deals damage to up to 5 enemies in a circular area (Damage Factor 1700).
Damage dealt to each target will be reduced by 15% for each target after the first.

Wu Zetian is the best garrison commander who you can pair with Theodora. She is perfect to deal with rally troops and also has skills to counter them. She can enhance Theodora’s fighting abilities when acting as the garrison commander. They are a good combination who are a threat to enemies when in a PvP battle. 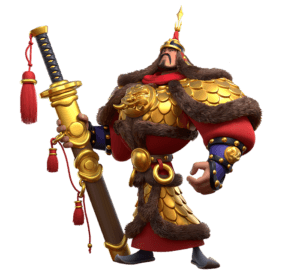 Yi Sun-Sin is also a good choice for Theodora. He has many defensive stats and also a shield that can absorb damage. His abilities are lacking to deal AoE damage, they make a deadly pair on the battlefield.