Genghis Khan is one of the best legendary cavalry commanders in Rise Of Kingdoms. The amount of nuke that Genghis Khan is providing is insane. Great commander to have. you can use Genghis Khan for a rally, field fighting and in some situations for defending.

Genghis Khan is the most notable of the nuking and cavalry commanders in Rise of Kingdoms. He can ferociously attack a single target through his all-powerful nuking attack and create extensive damage to enemies. In the ROK game, he wonders if you know how to use him properly in the game.

Apart from his skill damage capabilities, he also has powerful rage requirement reduction abilities. For these two reasons alone, he is sometimes referred to as the most powerful of all other commanders in the Rise of Kingdoms.

He is also a great cavalry commander, and in this, he exceeds expectations at times, whereby he carries out tremendous skill damage and rage restoration. You will find him a very interesting player in ROK if you aim to win the battles over your enemy forces with genghis khan talent tree. You can check how good Genghis is by using Rise of Kingdoms Tier List. 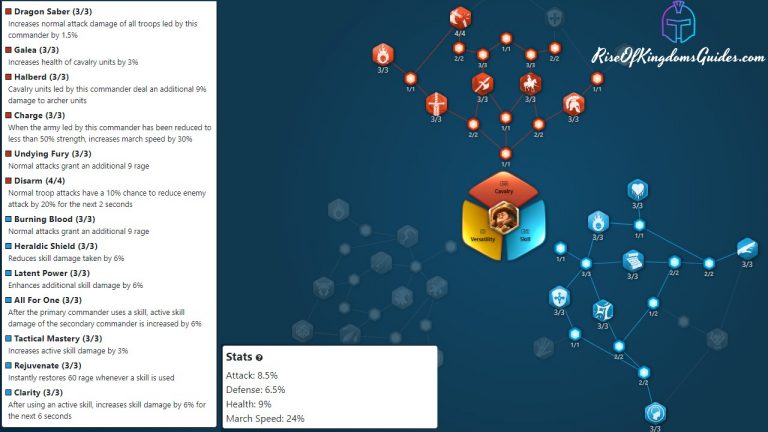 Genghis Khan is more of a cavalry commander than what the pictures tell of him in the ROK game. He looks more like an archer commander with bows and arrows, yet he is not so, but in essence, he is a formidable cavalry commander with equestrian skills that serve him and his troops remarkably well in the battles. You can unlock two of his unique skills if Khan is charging around as cavalry commander. If he carries out a cavalry march, he gains huge bonus damage, skill damage, and rage restoration.

However, you must intelligently and cleverly reach the above skills and talents to the maximum if you build it right. It is the inherent potentials that take Khan to the maximum heights. You would need to focus on his inherent strong points, and this is as the powerful nuking and cavalry commander. Hence, the best way forward for some players is to build around Genghis Khan’s Skill Talent Tree and then move on to Cavalry Talent Tree. This way, he becomes more versatile, and his army gets the most out of his talents, although he doesn’t have any Versatility Talent Tree.

You have only unlocked the low-level talents of Genghis Khan talent tree  now, but then this isn’t sufficient, so your next step in this direction would be to unlock ‘Feral Nature,’ and this again increases Khan’s rage restoration. His skill damage needs to be improved to give him more power on the battlefield, and for this, you need to unlock ‘Tactical Mastery’ and ‘Clarity’ talents. Simultaneously, you need to unlock ‘Heraldic Shield’ to reduce his skill damage talent.

After unlocking the talents above, your next best move would be to unlock his Cavalry Talent Trees skills. It is the next few steps that will substantially improve his cavalry talent in ROK. You, therefore, need to unlock the ‘Halberd’ talent, ‘Galea,’ Charge, and ‘Emblazoned Shield.’ All these talents are unlocked one after the other so that Khan’s talents increase in each specific stat of his cavalry unit. After unlocking these talents gives him that all-powerful image and Genghis Khan’s troops improve their health, march speed, and defense against skill damage.

You will also find that he has achieved his nuking capabilities to all-time highs by opening genghis khan talent tree.

There is no enemy in the Open Field marches that can defeat him when his talents are all unlocked. He also becomes quite strong in PVE and PVP, and nothing can stop him, for he becomes almost indestructible. However, he needs to be engaged in the marches in Open Field, for he cannot move out from the battle zones once his talents are all brought forth into the open. He then becomes a ruthless killer, and there is nothing that can stop him.

Further, rallying against a structure in full archer form means more trouble for the enemies as they are decimated one after the other without mercy.

He can attack a single enemy with this skill and deal a huge amount of damage. When maxed out, this skill can deal damage of 1700. Genghis Khan is one of the top damage dealers in the game. His rage requirement is reduced by 50, which lets him maintain his active skills. direct damage to a single target with an insane damage factor of 1700. This is great but expertise skill will give him a 30% chance to use first skill instantly again. Insane amount of nuke in a short period of time.

Direct damage to a single target with an insane damage factor of 1700. This is great but expertise skill will give him a 30% chance to use first skill instantly again. Insane amount of nuke in a short period of time.

Cyclone of the Steppes

This skill increases the march speed and it also reduces the active skill’s rage requirement. When an enemy attacks Genghis’s troops, their extra march speed would be gone and additionally be reduced by 30%. This is one of the best passive skills in the game.

This skill reduces the rage requirement by 100 for an active skill which means, Genghis only requires 850 rage to activate his ability. This skill also gives a 15% march speed boost. But, Genghis’s troops will lose 15% extra march speed when under enemy attack and lose a further 30% march speed. This is frustrating when Genghis is being attacked by multiple enemies.

With this skill, when Genghis Khan has the only cavalry and has more than 705 strength, the damage of the troop’s increases by 30% at maxed out level. This skill increases 30% damage to Khan’s troops when the troop’s strength is 70%. This skill gives a big advantage at the starting of the combat.

This skill is useful when the army of Genghis has less than 50% strength. This skill increases the skill damage and Khan gives additional rage when his troops are attacked.

This is a passive skill that increases Khan’s skill damage by 30%, which means that his active skill damage gets to 2210. He also receives a bonus of 25 rage each time the enemy hits his troops. This effect begins when the strength of Genghis Khan’s troops falls below 50%.

When Genghis Khan is the commander and has only cavalry units in his troops, he then has a 30% chance to use Chosen One skill again when he uses his active ability. You would definitely want to use only the cavalry Unit after you unlock this skill.

The best Rise Of Kingdoms pairing option for Genghis Khan is to make sure that his secondary commanders have also got nuking strength and also improves his troop’s combat ability in PVE and PVP. Nuking is best with PVE as it creates heavy damage, and anyone with similar capabilities will do well in ROK. Hence, commanders with similar skills and talents match best with genghis khan talent tree, especially in nuking abilities, and their combined strength in this can be devastating for the enemies.

The next best combination and perhaps equally great with the above ability is the Cavalry Skills that buffs cavalry troops. In the case of Khan, he only needs cavalry alone for troops to march while activating his skills in this area. His march is surely one of the best in ROK, and in this, both Minamoto and Cao Cao are good options as secondary commanders. Either of these two options would be terrific as both are nuking and cavalry commanders.

Unlike Belisarius’ skills, if you wish to prolong the battle, use Pelagius as the best pair for Genghis Khan. The fights would last longer as he has loads of healing factors that allow you to keep fighting on the battlefield. He also offers rage restoration, and both Khan and Belisarius can go well with the latter’s DPS factor.

If you are a F2P player, you can rely on Baibars talents, including his skill, to slow down the enemy. He also reduces the marching speed of his enemies and lets Khan tackle them easily. If Khan is rallying to a city, then Baibars is great for a conquering and nuking commander. He also has a healing factor, but the same after the battle only. However, Baibars lacks defense skills, which can be compensated through his fourth skill, ‘Lord Panther,’ which allows him to control the battle.

If in trouble, he can also go in and out of fighting to activate the healing effect. He will be a very good bet with Khan if you can play him cleverly and strategically by unlocking Genghis Khan’s talent tree. He also has great AOE-making abilities, and you can utilize him for alliance wars and large-scale battles with Khan as primary and Baibars as secondary commander.

From the above, it is clear that a few great commanders can pair with Khan to create terror to enemy forces in the POK game. Genghis Khan alone is enough for several battles as he has nuking talent and cavalry skills. With additional secondary commanders with similar or specific skills and talents, Khan is unsurpassable. He is a hot choice for most players wishing fast action and the savage force of an attack.

Consider Cao Cao pairing for Genghis Khan, and you have a very good option right here. Cao Cao is very versatile and has a very good damage factor. He is tanky build and slows down his enemies, which means that Khan can take on the opposing troops and do maximum damage. On the other side of Khan is chasing an enemy, then Cao Cao factor can slow down the enemy’s marching speed and help Khan defeat the enemy.

Again, Cao Cao has good rage restoration and healing factors to make use of active skill very fast. With the healing factor, Khan can inflict huge damages with Cao Cao constantly healing the troops. If you want to have more mobility than you can use Cao Cao talent tree.

Minamoto can also be considered as secondary commander to Khan as primary commander due to his damage factor. He is supposed to be one of the finest DPS commanders in the ROK, and this helps him decimate his enemies very speedily and efficiently. He also increases the damage to the target by 30%, and along with his speed of damage per second, Khan can remain unrivaled in the Open Field battles.

If you like some great tact while fighting your enemies, Belisarius can be counted among the very best pairing for Genghis Khan. In the first place, his damage factor may not be great, yet when you pitch him on the battlefield, his main skill factor against the enemies would be Attack reduction and Defense reduction.

In other words, the enemies will not be able to attack the troops with the same force as they did earlier, and again their defense takes a hit automatically due to Belisarius’s skills. It will naturally help Khan inflict huge damage on the enemy. In some ways, this is better than other talents, and naturally so for any player can take on mighty troops that have vastly reduced potentials.

Belisarius increases the Cavalry defense by 30% and increases marching speed by 15%. However, this pairing can be best used only when you attack with your utmost speed and then move away. To get more speed you can use Belisarius talent tree build but than you will deal less damage.