In this guide, we will talk about Scipio Africanus’s skills, strategy, and talent in the game Rise of Kingdom. If you are a beginner, this guide would help you a lot and you will know how to use the character of Scipio Africanus to his full potential and gain an advantage in the game.

He is one frequently used epic commander in the game of Rise of Kingdoms because of his powerful skills and mobility.

Publius Cornelius Scipio Africanus was a Roman general and later consul who is often regarded as one of the greatest generals and military strategists of all time. His main achievements were during the Second Punic War where he is best kn own for defeating Hannibal at the final battle at Zama in 202 BC, one of the feats that earned him the agnomen Africanus. Althrough considered a hero by the general Roman populace, primarily for his contributions in the struggle against the Carthainians, Scipio was reviled by other patricians of his day. In his later years, he was tried for bribery and treason, unfounded charges that were only meant to discredit him before the public. Disillusioned by the ingratitude of his peers, Scipio left Rome and withdrew from public life.

For the next 5 seconds, the damage (not skill damage) taken by Scipio’s troops are reduced by 25% with this skill. This is quite high when you see him as a general commander.

This skill is not bound to any specific type of troop. This skill also increases the counter-attack by 25% for the next 5 seconds. This skill is useful when you pair him with an infantry commander.

This is a good skill but the chances of it happening are less. This skill needs your troops to be at 40% of their strength which is never good unless your enemy is tougher than you.

Passive Skill
Increases all damage when attack other Governors’ cities.

This skill increases all damages when attacking other city governor’s. That’s quite high for an epic commander. Other commanders like Mehmed II have a better damage bonus and they have secondary perks to a skill. Having such secondary skill for a free-to-free player is something nice.

This is the most talked-about skill of Scipio Africanus. This skill gives you a 10% true capacity bonus. This is unique where if you have 10% more troops than your enemy then you are going to be 10% more effective. You will additionally get 10% more troops and also 10% more defense for all types of troops. This adds a lot.

The 50% enhancement buffs are expensive for this reason only, it doesn’t matter if you don’t have the best commanders, the best skills, or even the highest level tier troops if you have 50% more troops than your opponents. 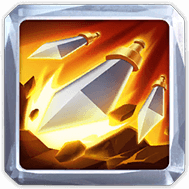 This skill increases the troop’s attack by 100% for the next 2 seconds but the probability is only 15%. This skill can be activated once every 5 seconds.

Scipio also has a 15% chance to heal his wounded units when his army is at less than 40% of their strength.

When you are a new player you can pair Scipio with any commander that you want. My advice is to check our tier list and you will see what are the strongest commanders that you have in your account. Overall it is best to use commanders that have a lot of AOE damage because Scipio will increase troop capacity and give you some survivability so you can use more skills.